I cannot thank you enough for my waffle maker!

Some of you know that I used my bridal shower gift for it, but what you didn’t know was that it was actually a huge group effort (yo, waffle makers are pricey). It was only with the generosity from past and present colleagues that I was able to pick up this awesome makes-four-at-a-time waffle maker! I received a lot of great kitchen appliances from my wedding, but I probably use this one the most – almost on a weekly basis. Some of you have even seen me munching away on a waffle at my desk. They make for a great grab-and-go breakfast item.

This is the recipe I use that lasts me all week. It’s versatile and pairs well with maple syrup or fruits. AND, it’s technically a pancake recipe (waffles are pancakes with abs) from one of my favourite NYC brunch places, Clinton Street Baking Company.

Cinnamon Waffles
(Makes about 16 to 18 waffles) 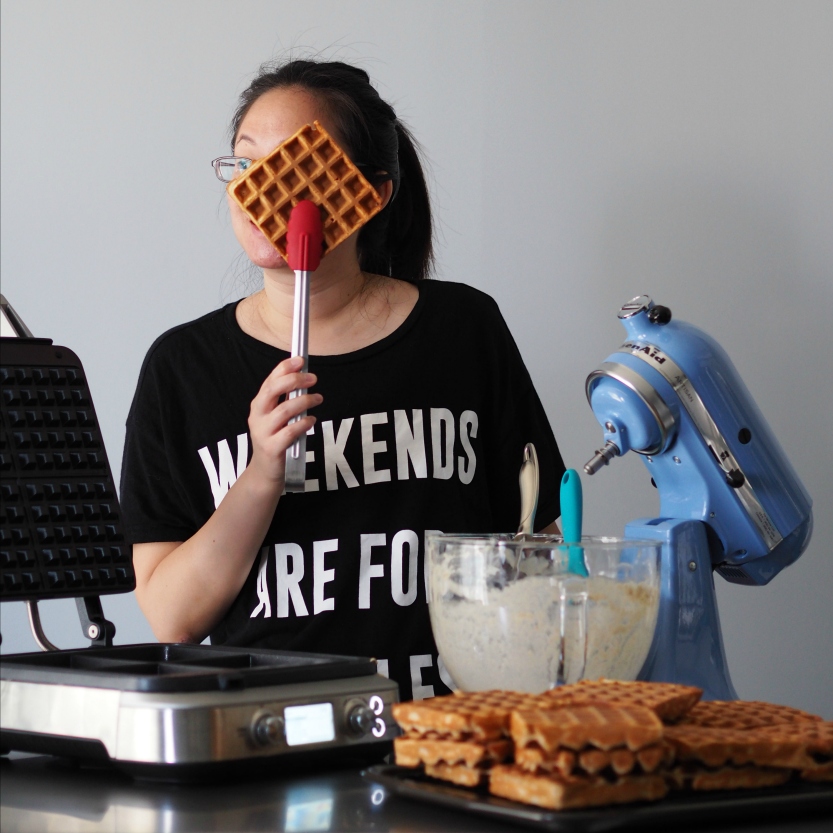 Oh if you’re what waffle maker I got, it’s the Breville Smart Waffle. I read a lot of reviews and it came down to the Breville and the All-Clad version. The sales person at the store told me that she owned the All-Clad one and recommended it highly. I wanted the waffle iron to make four at a time (to cut down on waiting time when I’m hungry in the morning), but it was the two slice All-Clad that mainly received the praise, not the four slice. Wait, are waffles called slices?

That was the deciding factor for the Breville Smart Waffle and I couldn’t be happier. It’s truly nonstick, I haven’t had to use any oil on the irons (in fact, the instruction manual says not to). The waffles release super easy when they’re done. The moat around helps catch any overflow (which has happened when I pour too much batter in). But I haven’t even had to fiddle with the settings because the machine just magically knows how long to cook the waffles for. And you can adjust the dials for something lighter or a bit more darker. I love how thick and fluffy the waffles turn out! The deeper the irons, the better. I knew I didn’t want one that creates thin ones that are akin to frozen waffles. This waffle maker is basically perfect for my sweet tooth and creates the right amount of thickness for savoury dishes too (chicken and waffles!).